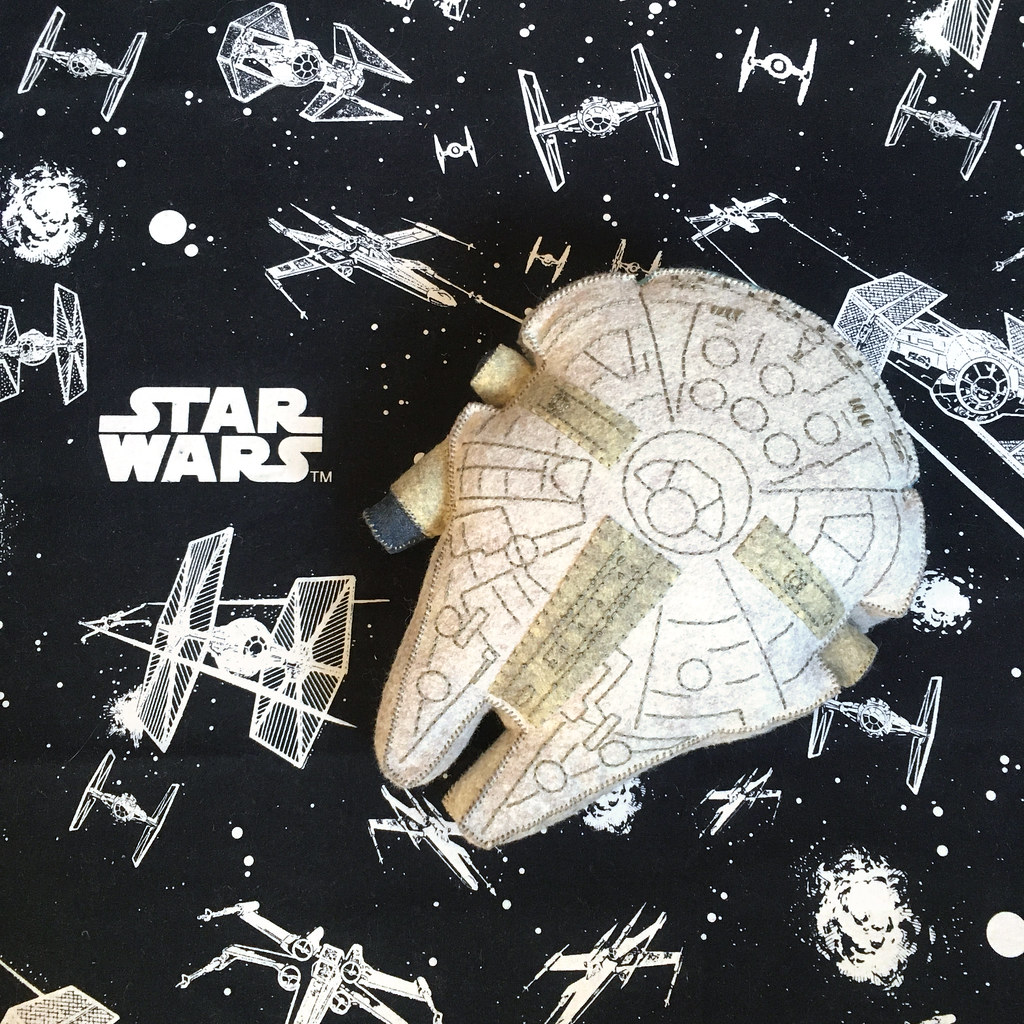 Happy Star Wars Day! This May the Fourth, I'm very happy to share my pattern for making a felt Millennium Falcon.

I love, love, love making Star Wars projects, and usually they start as gifts for my brother. In the past, I've designed a Wompa, a Storm Trooper, Maz Kanata, C-3PO, and more. This particular plush is a little different from the others, in that it's a ship and not a character. But I think Star Wars fans would agree that the Millennium Falcon sort of is a character, right?

So here's the story on this. It's been a while since I shared a Star Wars Day pattern and that's because I started this two years ago. At least, I think that's when I started it. It's been so long that I couldn't actually find the step-by-step photos I took. Yikes!

Since I can't show you all the steps for this, I almost decided to let it be only a one-of-a-kind felt ship. But maaaaayybe you're up for trying this with a few simple instructions? I'll warn you that at times it was a little fiddly. But worth it, I think! Be sure to look at the photos as a guide for placement on the pieces. 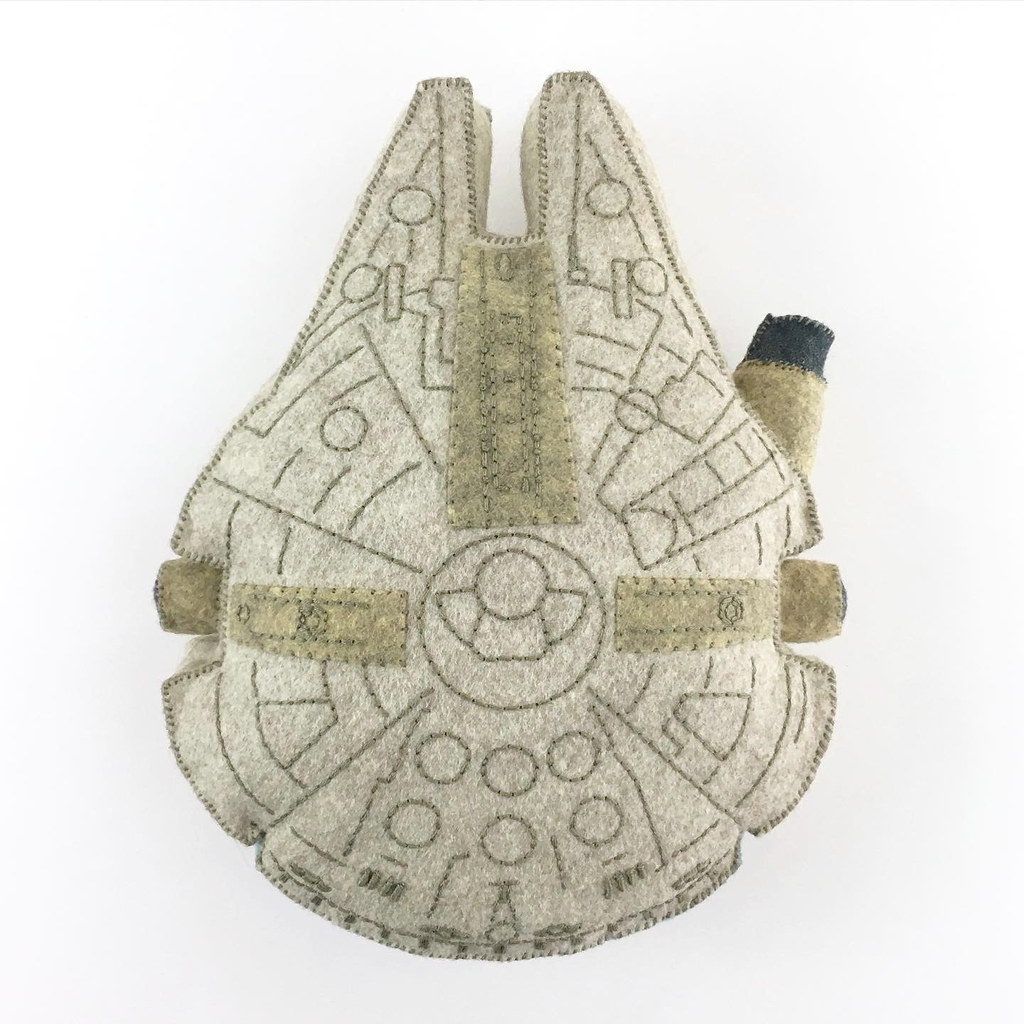 Here's what you need:

I did this before cutting out the shape because I used Sulky Sticky Fabri-Solvy, so I didn't want to risk it shrinking when soaking off the stabilizer.

I used three strands and back stitch for almost everything except the thick lines on the pattern. For those I did bullion knots. And for the dots on the small front piece I used french knots.

2. Cut out the embroidered Millennium Falcon shape (plus an extra one that's not embroidered) and the small embroidered pieces. Stitch the small pieces onto the main piece with whip stitch and three strands of embroidery floss. They should fit in the non-embroidered areas. 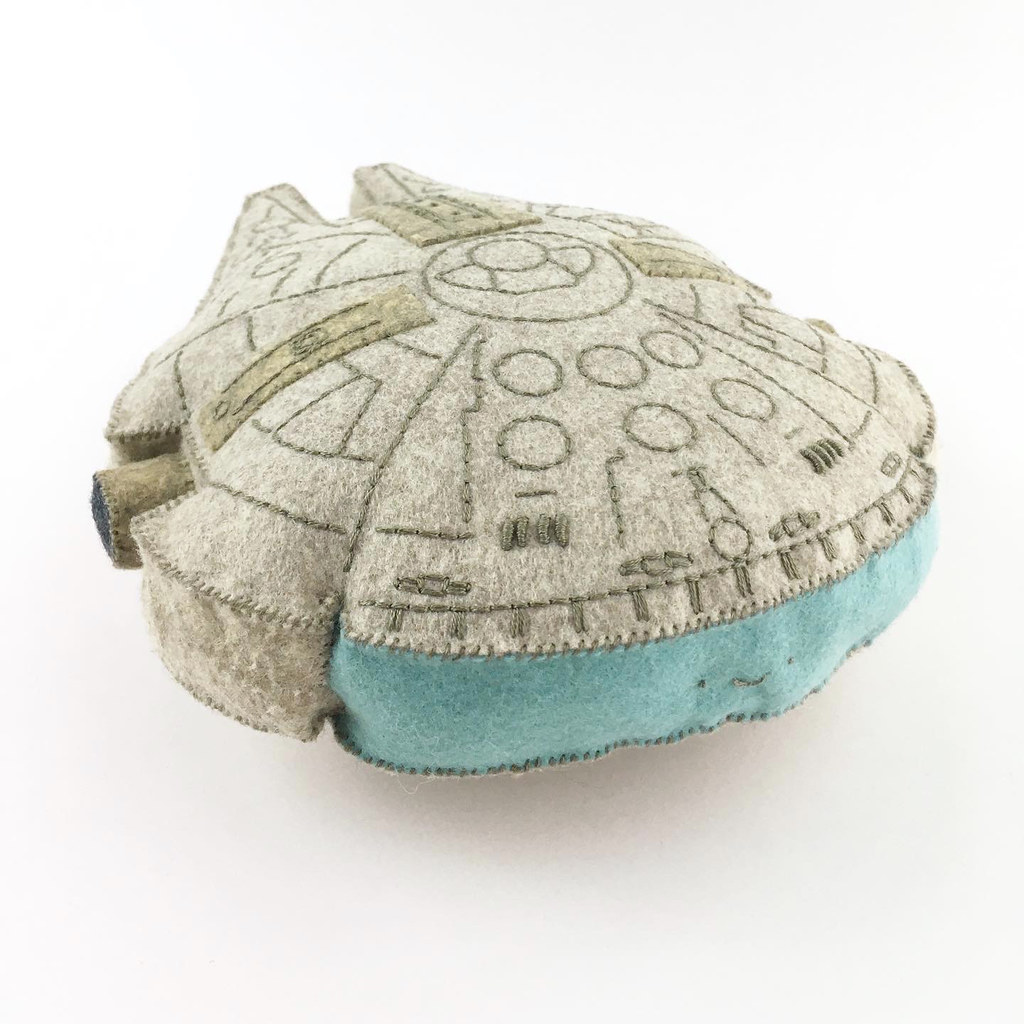 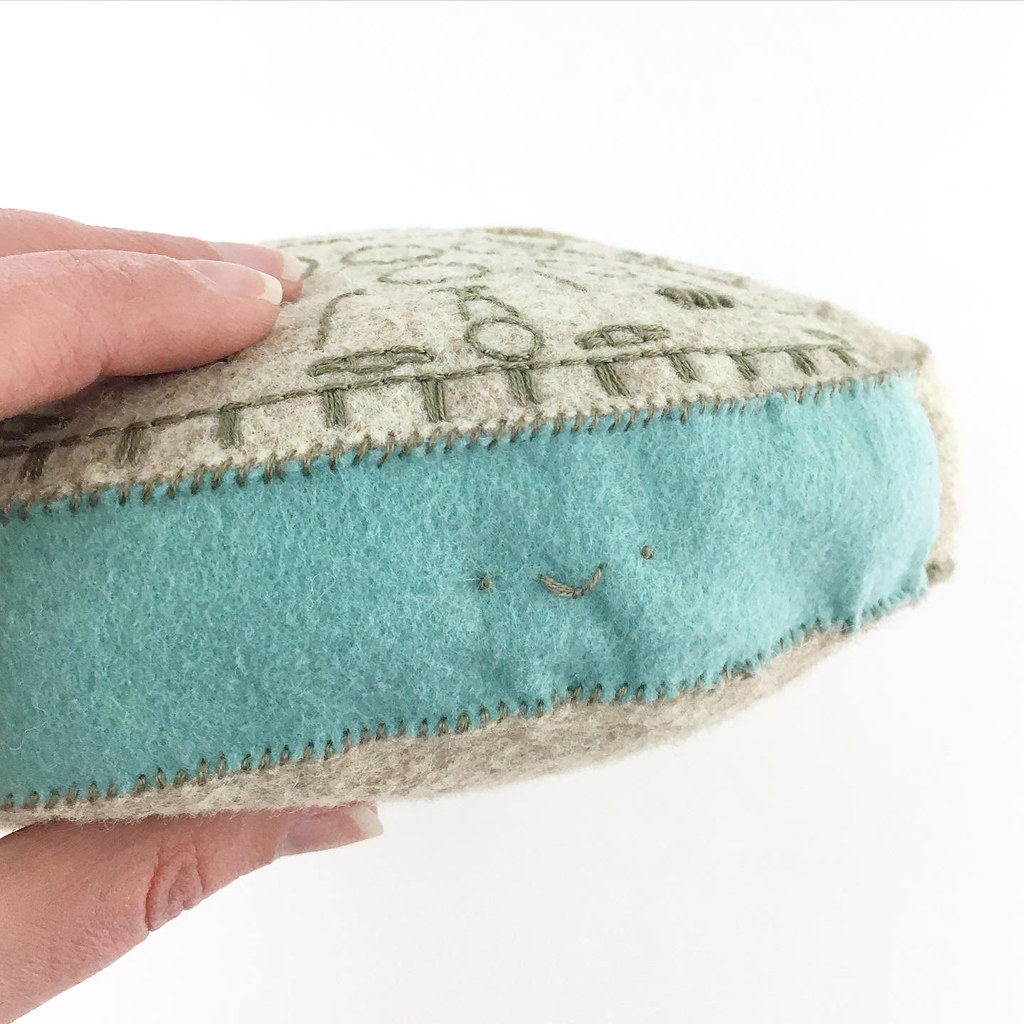 3. Cut a strip of aqua blue felt with the long rectangle template. Cut a long strip of light gray tan felt that's the same height as the blue strip (1-1/4" tall). I think mine was 24 inches? You can piece this together if you need to. Basically it will need to wrap around the sides of the Falcon.

I added a face to the blue piece because it's kinda my thing. You can do that too if you want, and now's the time! But it's more traditional without the face.

Continue sewing around the entire shape, fitting the tan felt into all the lines of the ship. You should end up with a little extra tan felt, which you can trim off. If you came up short, add another strip to finish it off.

5. Next, sew around the bottom in the same way. You should end up with an opening where the blue and tan meet.

6. Fill the Millennium Falcon with stuffing. When it puffs up a little, it's super cute! But don't overstuff it. Stitch the opening closed. 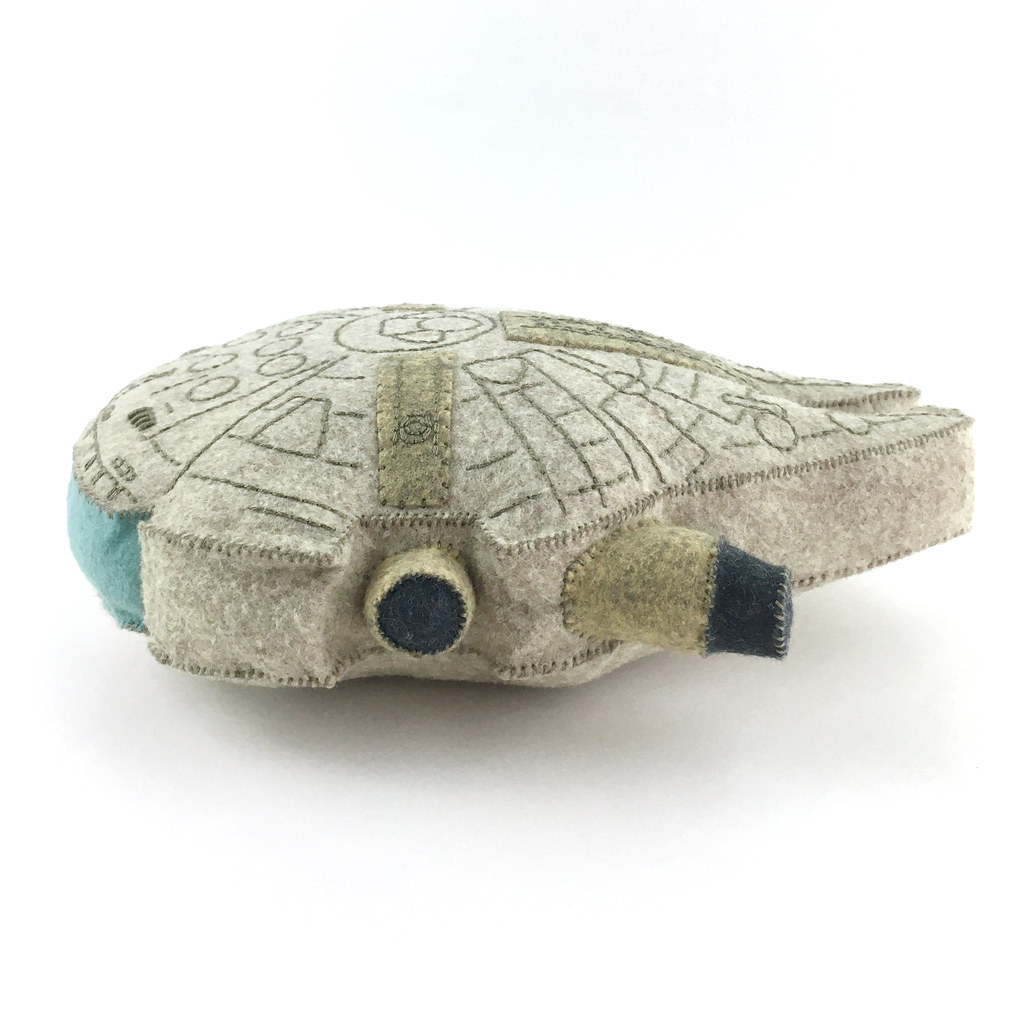 8. Stitch the curved pieces onto the circles and then stitch the end down where it overlaps. You should have pieces that flare out a little at the bottom.

9. For the gray-tan side escape pods, put a tiny bit of stuffing in each one and then stitch them down to the sides of the ship in the large indented areas.

10. For the cockpit, stitch the rectangle to the end of the charcoal gray piece and stitch it into a cylinder.

Now, this next part is the hardest to explain, because I kid you not, I just cut the thing. If it doesn't go well the first time, thankfully, felt isn't very expensive.

11. Flatten the cylinder on the cockpit piece and cut it off at about a 45-degree angle. Add some stuffing and stitch it onto the side of the ship as shown in the photos. 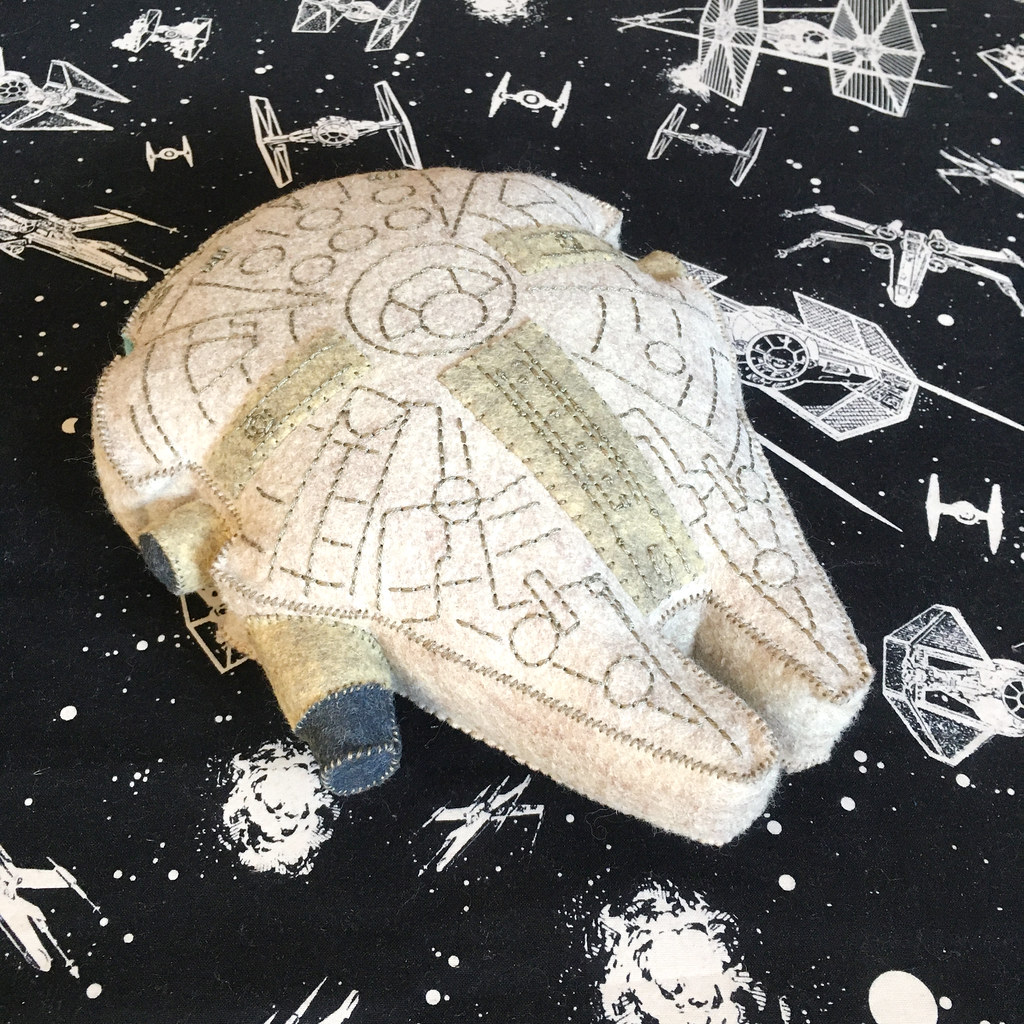 All that's left to do is send your Millennium Falcon to infinity and beyond! Wait...that's the wrong movie.

Anyway, I hope you enjoy this VERY paired down tutorial. I'll do my best to answer any questions, but a lot of this I just figured out as I went. As I said, this was made as a gift, but over a long period of time and without taking notes. Oops!

Also, my version of the Falcon is nowhere near as detailed as the real deal, even with all that stitching on top. This is more like an impression of the Millennium Falcon, and I kind of love that.

May the Fourth be with you!

NOTE: The Millennium Falcon is copyright Disney/LucasArts, and I'm only sharing this pattern as fan art. Please do not sell items made with this pattern.
Mollie at Monday, May 04, 2020
Share